Signposted off A389 between Bodmin and Wadebridge.

Beetroot is a good source of vitamin A, manganese and potassium. A good juice to boost the immune system, could help beat high blood pressure and a great liver cleanser. 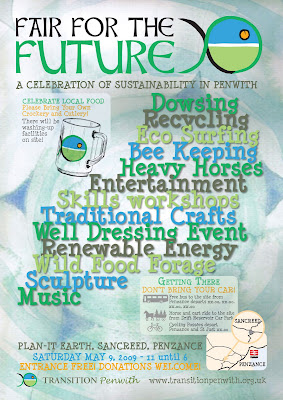 Organised by Plan-itearth and Transition Penwith

It certainly was a celebration of sustainability and an excellent day for everyone who attended. The sun came out for most of the day and gifted the event with over 2Kw of free energy, courtesy of South West Solar Solutions.

Fair for the Future aims to celebrate sustainability by gathering together local people, including producers, craft workers, artists, and musicians to share information, skills and ideas so they can move forward towards a fairer future. Fair for ourselves, Fair for nature and Fair for the planet.

The event was a joint venture by Transition Penwith and the Plan-it Earth Environmental Education Project and was held at Plan-it Earth’s Chy Ena site at Sancreed near Penzance. Over 1,000 visitors – 5% of the population of Penzance – arrived to see how local organisations and businesses are working together to reduce the impacts of climate change and fossil fuel depletion in an enjoyable and informative way.

There were local craft demonstrations, lots of sustainable food and drink from local suppliers and farms, and music from local bands. The event was opened by Sancreed Parish Councillor and Tree Warden Tony Hole, who arrived in a Pony and Trap.  Visitors included the Mayor of Penzance and local MP Andrew George who arrived on his bicycle.

A ‘Well-Dressing’ took place during the day, an ancient custom popular in the Peak District, that blesses the purity of the local water supply.  The well at Sancreed was decorated by a colourful and beautiful display created from petals and seeds by Jo Tagney.
The FTI Cornwall Information bus attended the event and took photos throughout the day.
There’s over 80 photographs on the website.

Dr. Ott is a pioneer light researcher and the inventor of full-spectrum lighting. It was he who first coined the term “malillumination” to describe sunlight deficiency and the harmful effects of typical cool-white and pink-colored fluorescent light on learning, behavior, health and longevity.

Even back in 1980, scientists reported that cool-white fluorescent lighting produced increased levels of the stress-producing hormones ACTH and cortisol. They noted that their findings explained the agitated mental and physical behavior of children sitting all day under artificial lights, and recommended a change to illumination similar to that of natural light.

They say cannabis is dangerous. It is not harmful to the human body or mind. Cannabis does not pose a threat to the general public. Cannabis is very much a danger to the oil companies, alcohol, tobacco industries and a large number of chemical corporations. Big businesses, with plenty of  cash and influence, have suppressed the truth from the people. The truth is, if Cannabis (hemp) was utilised for its vast array of commercial products, it would create an industrial atomic bomb! The super rich have conspired to spread misinformation about the plant that, if used properly, would ruin their companies. END_OF_DOCUMENT_TOKEN_TO_BE_REPLACED

Although few have heard of this strange sounding name, Codex Alimentarius (food code) becomes law on the 31st December this year. Described by some as the regulation of health foods, Codex Alimentarius aims to harmonise and control food standards at an international level.

While there are obvious benefits to maintaining good standards and practices in all aspects of food preparation and distribution the idea of garlic, and even water, being labeled as a pharmaceutical product, with all the regulations that would go with it, is seen by many health practitioners as a step to far in global governance and caused many people to view it as a scam designed to take away our freedom of choice of how we nourish ourselves.

The United States, Canada, the Europeans, Japan, most of Asia, and South America have already signed agreements pledging total harmonization of their laws including food and drug laws to these international standards in the future.

Codex Alimentarius is now enforceable through the World Trade Organization (WTO). If a country disagrees with or refuses to follow Codex standards, the WTO applies pressure by withdrawing trade privileges and imposing crippling trade sanctions.

So what is being proposed? What can we expect under Codex?

To give you an idea, here are some important points:

According to John Hammell, a legislative advocate and the founder of International Advocates for Health Freedom (IAHF), here is what we have to look forward to:

“If Codex Alimentarius has its way, then herbs, vitamins, minerals, homeopathic remedies, amino acids and other natural remedies you have taken for granted most of your life will be gone. The name of the game for Codex Alimentarius is to shift all remedies into the prescription category so they can be controlled exclusively by the medical monopoly and its bosses, the major pharmaceutical firms.

The Codex Alimentarius proposals already exist as law in Norway and Germany where the entire health food industry has literally been taken over by the drug companies. In these countries, vitamin C above 200 mg is illegal as is vitamin E above 45 IU, vitamin B1 over 2.4 mg and so on. Shering-Plough, the Norway pharmaceutical giant, now controls an Echinacea tincture, which is being sold there as an over the counter drug at grossly inflated prices. The same is true of ginkgo and many other herbs, and only one government controlled pharmacy has the right to import supplements as medicines which they can sell to health food stores, convenience stores or pharmacies.”

It is now a criminal offence in parts of Europe to sell herbs as foods. An agreement called EEC6565 equates selling herbs as foods to selling other illegal drugs. Action is being taken to accelerate other European countries into ‘harmonization’ as well.

Paul Hellyer in his book, “The Evil Empire,” states: “Codex Alimentarius is supported by international banks and multinational corporations including some in Canada, and is in reality a bill of rights for these banks and the corporations they control. It will hand over our sovereign rights concerning who may or may not invest in our countries to an unelected world organization run by big business. The treaty would make it impossible for Canadian legislators either federal or provincial to alter or improve environmental standards for fear of being sued by multinational corporations whether operating in Canada or not.

This will create a world without borders ruled by a virtual dictatorship of the world’s most powerful central banks and multinational companies. This world is an absolute certainty if we all sit on our hands and do nothing.”

More at The Health Movement against Codex Alimentarius. 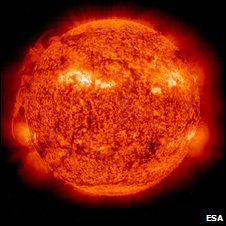 How to make a star on Earth.

The US has finished constructing a huge physics experiment aimed at recreating conditions at the heart of our Sun.

The US National Ignition Facility is designed to demonstrate the feasibility of nuclear fusion, a process that could offer abundant clean energy.

The lab will kick-start the reaction by focusing 192 giant laser beams on a tiny pellet of hydrogen fuel.

To work, it must show that more energy can be extracted from the process than is required to initiate it.

Professor Mike Dunne, who leads a European venture that is also pursuing nuclear fusion with lasers, told BBC News that if NIF was successful, it would be a “seismic event”.

“It would mark the transition for laser fusion from ‘physics’ to ‘engineering reality’,” he said.

There’s a good video on the BBC website here

Cornwall County Council planning commitee voted 20 to 1 against Sita’s plans to build a huge incinerator at St Dennis in Mid Cornwall. Despite recommendations to approve the plans from a Council planning officer the overwhelming feeling and debate was strongly opposed to it. Dick Cole, Matthew Taylor MP and a large majority of councilors took their turn to speak out against the project while campaigners from the St Dennis Anti-incinerator Group and members of the public watched anxiously downstairs in the viewing area. After a short lunch break the vote was finally taken; twenty votes against, one in favour and one abstained. As celebrations began outside County Hall a Sita representative was seen driving off in a hurry.

A truly remarkable outcome and proof that people power really can influence what happens in our Duchy. The STIG group was praised by both councillors and MPs for their outstanding research, determination and professional approach to their well thought out and well presented campaign. This was a victorious day for Cornwall and its people.

Celebrations outside County Hall as the result sinks in.

Relief for campaigners after a long hard fight.

Final resting place for the banners and flags.

The sealers stormed into the once-peaceful seal nursery with their hakapiks raised. Within a matter of seconds, defenseless baby seals were clubbed and their blood spilled onto the ice. This year the Canadian government will allow commercial sealers to slaughter 280,000 seals for their fur.

The European Union will consider banning its trade in seal products in a few weeks. But the fishing industry and the Canadian government are lobbying furiously to fight the ban. Just last week, Russia announced it would halt the killing of baby seals. It’s clear the world community is condemning such killing — increasingly Canada stands alone in defending the slaughter.

You can help by making a small donation here.